Jack London is one of my favorite American writers.

“I would rather be ashes than dust!
I would rather that my spark should burn out in a brilliant blaze than it should be stifled by dry rot.
I would rather be a superb meteor,
every atom of me in magnificent glow,
than a sleepy and permanent planet.
The proper function of man is to live, not to exist.
I shall not waste my days in trying to prolong them.
I shall use my time.”  ~ Jack London  (1876 – 1916)

Amazon has a two-part documentary of London’s life and work that is worth watching for insight into the personal and historical influences that shaped London’s development and ultimately, his contributions to literature. It is also a great teaching film for new writers.

Here is the link to the documentary.

Read Call of the Wild online. Serialized in the Saturday Evening Post.

Until Social Services and Child Protective Services could approve Vern and Shirley as foster parents, Marsh was placed with another family. Their location necessitated he change schools. His networks and supporting mentors vanished overnight.

Marsh had a loving mother in his first 10 years of life, and even though his father abandoned them when he was a child, that stable, unconditional relationship had served him well since her death. However, even such a beginning can shatter when subject to years of abandonment. Marsh should have been able to stay with Vern and Shirley. Anyone who bothered to get to know them and observe Marsh with them would see they would be fine caregivers. A bond had already been formed.

Protocols often get in the way of logic. Marsh began a painful journey to maintain a positive view of the world. He spoke to Shaundra frequently, pouring out his feelings. Her parents talked with him by phone when he first moved to the foster family. But, social service suggested that the foster family not allow these calls until the people could be evaluated by their staff. So, even that support was cut off.

Having had an independent life at Uncle Albert’s, Marsh found his new environment stifling. There were four other kids in the house — three foster kids. He was the oldest. The next in age was eight years old. His foster parents were very strict. He had a list of chores to do each day, homework was a sitting affair at the dining room table. If he finished early, he was asked to tutor the younger kids.

Marsh experienced a loss of identity. Depression and anger followed.  He plotted to run away, and run away for good.

When Toby reconvened her writing group, she learned of Marsh’s fate. Immediately, she began to intervene. Between Toby, Shirley, and Barbara, they amassed a legal team to get him back as soon as possible.

The loss of the boy to foster care infuriated Toby. Finding Marsh and getting him back to his community either at Shirley and Vern’s or her home, or the home of one of the Fishin’ Chix, became her new focus, and a direction to pour all her energy, to forget about the cancer that could return and take her life.

“You know I feel about the foster care system like I do about environmental policies,” Toby said, sipping from her glass of wine. “For all the good intent, the system shoots itself in the foot.”

She was sitting with Barbara, Shirley and Vern on the deck at The Fish House in Pensacola. They gathered to discuss how to speed up a court hearing for Marsh.  Intuitively, they each understood that time was of the essence before real emotional damage may occur in the boy they’d all come to love.

Thank you for reading Part I of Toby Hemingway. Please leave me a comment on what you liked about it, or what you may have questioned. Writing daily online for readers proved enjoyable for me. The story is a weave of several stories I separately developed during the same period of time in Pensacola, Florida.

Here is the complete sketch of what may become a novella: Toby Heminway_Part I

Please leave any helpful comments or suggestions you may have about the story so far. What would you suggest in terms of plot lines going forward? Character development?

Thanks to all you readers of this blog. I follow many of you and enjoy your posts. Would love to hear from you.

The Little Farm of Dream Acres 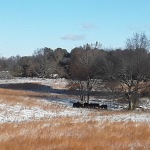