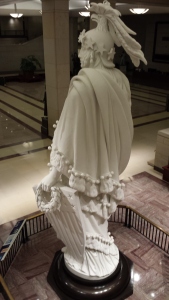 The cries for boots on the ground in Syria, for retribution, and a growing “fear of other” are not new. In fact it is a predictable response to perceived threats to Americans.

I remember so well the face of George W. Bush as he declared “Mission Accomplished” after the first few rounds of that administration’s “Shock and Awe” campaigns. Did it make Iraq safe, did it stamp out terrorism? Is Al Quaeda wiped out?

No, in fact the opposite is true, and many analysts now target the Iraq War as the beginning of the rise of ISIS.

Another pernicious behavior among Americans is the “fear of the other” – of anyone perceived to not look like “us”…us being white, Anglo-Saxon, Christian immigrants. Americans are and never were of that description though the people in power for so long could be described that way. Of course, over nearly 3 centuries of grieving their rights, Americans begrudgingly are accepting that the “face” of the United States is multi-ethnic, and religiously diverse.

Let us not forget these ugly facts that are a part of our history: genocide of Native Americans; enslavement and persecution of African Americans; internment of Japanese Americans during WWII, and so on.

Now the cry is to keep out Syrian refugees who might harbor terrorists. The fear is understandable in light of the bombing of a Russian jet, killing all aboard; the Paris shootings and slaughter, and the Beirut attacks on civilians — all claimed by ISIS as retribution for our way of life. This is a threat no doubt. But let it not push away our better angels to respond in an equal force, BECAUSE WE HAVE RECENTLY BEEN REMINDED THAT THE STRATEGY DOES NOT WORK, IN FACT IT CREATES WHAT IT PURPORTS TO STAMP OUT.

This is a time for calm, for prudent decision making and for our humanity to be strengthened. The Syrian refugees are fleeing the forces that have destroyed their homeland. Just as the Irish fled to America under the brutal oppression of the English in the nineteenth century. Our relatives were refugees fleeing from brutal forces, poverty, and oppression. Let us not forget who we are and extend a helping hand to people who are without country, without the basic resources to live.

We can keep our humanity and also keep our country safe.