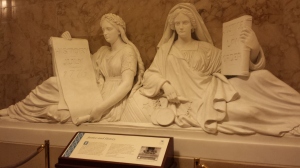 This series of posts is devoted to getting to know the Presidential candidates more deeply – specifically to understand their early influences and education that has formed their character. See my previous post in which I quoted W.E.B. Dubois ideas about the importance of education in building the character of a person. Here is a brief clip from the overall quote from The Talented Tenth:

If we make money the object of man-training, we shall develop money-makers but not necessarily men; if we make technical skill the object of education, we may possess artisans but not, in nature, men. Men we shall have only as we make manhood the object of the work of the schools—intelligence, broad sympathy, knowledge of the world that was and is, and of the relation of men to it—this is the curriculum of that Higher Education which must underlie true life. On this foundation we may build bread winning, skill of hand and quickness of brain, with never a fear lest the child and man mistake the means of living for the object of life. . . .

I will start with Bernie Sanders’ and Donald Trump’s educational background and early influences. These links will help get readers started doing their own independent research. Please comment back on this blog post to help us deepen our understanding of what has formed the character of these two candidates.

Scroll down to the link for Bernie Sanders, The Pros and the Cons, by Donald Michaels for an objective background on Senator Sanders.

Independent politician Bernie Sanders was born on September 8, 1941, in New York. He grew up in Brooklyn as the youngest of two sons of Jewish immigrants from Poland. His father worked as a paint salesman. As part of a struggling working-class family, Sanders recognized early on America’s economic disparity. As he told the Guardian newspaper, “I saw unfairness. That was the major inspiration in my politics,” he said. Sanders also counts American socialist leader Eugene V. Debs as an important influence.

Sanders attended Brooklyn’s James Madison high school and then went on to Brooklyn College. After a year there, he switched to the University of Chicago. Sanders became involved in the civil rights movement during his time at university and served as an organizer for the Student Nonviolent Coordinating Committee. After finishing college in 1964, Sanders lived on a kibbutz in Israel before settling in Vermont. He worked a number of jobs, including filmmaker and freelance writer, while his interest in politics grew.

Other Links:  Who is Bernie Sanders

Donald John Trump was born on June 14, 1946, in Queens, New York, the fourth of five children of Frederick C. and Mary MacLeod Trump. Frederick Trump was a builder and real estate developer who came to specialize in constructing and operating middle-income apartments in Queens, Staten Island and Brooklyn. Donald was an energetic, assertive child, and his parents sent him to the New York Military Academy at age 13, hoping the discipline of the school would channel his energy in a positive manner.

Trump did well at the academy, both socially and academically, rising to become a star athlete and student leader by the time he graduated in 1964. He then entered Fordham University and two years later transferred to the Wharton School of Finance at the University of Pennsylvania, from which he graduated in 1968 with a degree in economics.

Books:  How to Survive a Bankruptcy; The Art of the Deal

Other Links: Donald Trump Biography, On the Issues

2 thoughts on “Presidential Candidates’ Education: Bernie and The Trump”