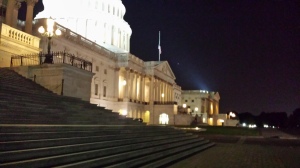 This post continues the examination of the education and early influences that formed the character of Presidential Candidates. Below are a few ways to get started with your own independent research. Please reply back with additional links or information to enrich this online discussion.

See the link to Hillary Clinton, The Pros and the Cons by Donald Michaels which gives an objective background on Mrs. Clinton’s upbringing and education.

The eldest daughter of Hugh and Dorothy Rodham’s three children, Hillary Diane Rodham was born in Chicago on October 26, 1947. Her father, owner of a small drapery fabric business, was a staunch Republican from Pennsylvania. Her mother, a closet Democrat who left her own dysfunctional home at 14 to work as a nanny, was affectionate and levelheaded. From her parents, Hillary learned thrift, hard work, self-reliance, service to others, and a love of God and country. Her mother inculcated a deep respect for learning and coached her young daughter to fight back against bullies: “You have to stand up for yourself,” she told Hillary. “There’s no room in this house for cowards” (Hillary Rodham Clinton, Living History, Simon & Schuster, 2003,12).

Hillary graduated from Wellesley College and then went to Yale Law School, where she was one of just 27 women in her graduating class… After law school, Hillary chose not to go to a big New York or Washington law firm. Instead, she went to work for the Children’s Defense Fund, going door to door in New Bedford, Massachusetts, gathering stories about the lack of schooling for children with disabilities, which contributed to the passage of historic legislation to require their education. https://www.hillaryclinton.com/about/bio/

According to a biography by McGill University professor of history Gil Troy, Rodham’s early political development was shaped most by her high school history teacher (like her father, a fervent anticommunist), who introduced her to Goldwater’s The Conscience of a Conservative,[17] and by herMethodist youth minister (like her mother, concerned with issues of social justice), with whom she saw and met civil rights leader Martin Luther King, Jr. in Chicago in 1962.[18] – https://en.wikipedia.org/wiki/Hillary_Clinton#Early_life_and_education

Other Links: Hard Choices (some audio to listen to), Wikipedia – Early Life and Education, NY Times Article, On the Issues

I have not located an objective source for Marco Rubio but as soon as I do I will add the link. Check back for updates.

Born in Miami, Florida in 1971, Marco Rubio is the son of Cuban immigrants. After earning a bachelor’s degree from the University of Florida in 1993, he went to the University of Miami for his law degree. Rubio’s political career began with his election to the West Miami City Commission in 1998. He was elected in the Florida House of Representatives the following year. In 2009, Rubio won his campaign for the U.S. Senate… Born in Miami, Rubio spent part of his childhood in Las Vegas, Nevada. The family, however, returned to Florida in the 1980s. A stellar athlete, Rubio was a top football player at South Miami High School. He graduated in 1989 and earned a football scholarship to Tarkio College in Missouri. Rubio left the school after a year and eventually enrolled at the University of Florida. After completing his bachelor’s degree there in 1993, he earned a law degree from the University of Miami in 1996. http://www.biography.com/people/marco-rubio-20840041#synopsis

The Rubio family, which was Catholic, moved from Florida to Nevada in the late 1970s and joined the Church of Jesus Christ of Latter-day Saints…The Florida senator was baptized into the Mormon faith when he was approximately 8 years old, and family members recalled that he was deeply invested in the religion having met with missionaries and attended LDS youth events… But once the Rubios left Nevada and returned to Miami, they rejoined the Catholic Church….

Books: An American Son – A Memoir Listen to Audio by Mr. Rubio

Other Links: The Rise of Marco Rubio, Wikipedia – Early Life and Education