January and February obliterated global temperature records, setting up conditions for the further retreat of the Arctic summer ice cover, scientists have warned.

Researchers did not go so far as to predict a new low for the entire 2016 season. But they said the ice pack over the Beaufort Sea was studded with newer, thinner ice, which is more vulnerable to melting. Ice cover along the Alaska coast was very thin, less than 0.5 meters (1.6 ft).

In my novel, Threshold, Carla Connor – a climate scientist who studies the mass of sea ice – is stunned when the summer ice cover in the Baltic Sea is reduced to open water on her monitors. Later she spars with Ed Flanagan, a conservative businessman about the reality of climate change:

Carla: “Temperatures on the planet are regulated in big systems that most people don’t completely grasp. The polar caps by virtue of the albedo factor reflect an enormous amount of solar energy.”

Ed: “First time I’ve heard the polar caps have a libido,” he quipped.

The loss of the reflective white ice cover in the polar regions exposes more of the absorptive dark ocean to solar heat, causing the water to warm up. This goes on to raise air temperatures, and melt more ice – reinforcing the warming trend.

Scientists have warned the extra heat is the equivalent of 20 years of carbon emissions. 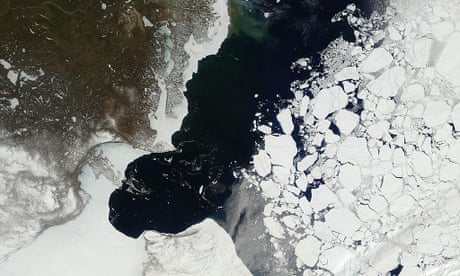 One thought on “Record Ice Melt in the Arctic: Albedo or Libido?”