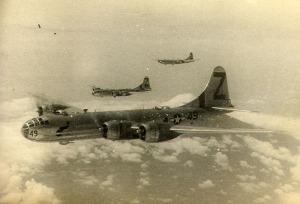 On Veteran’s Day my family’s thoughts turn to the man in our family who served so well in the Pacific theater as a B-29 Pilot. His crew stuck with him through low altitude bombing over Tokyo and Saipan. There are many tales that abound from all the crew members, all passed on save one. Dad took his final flight over the Great Divide last December on Pearl Harbor Day.

It was not until I read Laura Hillenbrand‘s great book about Louie Zamberini, that I understood my Dad, his crew, and the Army Air Corps were the liberators of over 130,000 prisoners of war in Japan. I knew about the POWs but what I never comprehended, until I read Unbroken, was the brutality and suffering in those camps. When she described accounts of the POWs on spotting the brand new weapon of the U.S. – the Super Fortress (B-29) -and the distant flames from Tokyo – I felt such pride about my Dad and his crew members, whose daughters are our friends to this very day.

Dad lived a long life after WWII but it defined his life thereafter. Today I feel pride in my heart for Dad, his crew, my former husband Tom Williams, a Viet Nam War veteran pilot; for all the men and women today who go forth under difficult circumstances, whose families sacrifice as ours did (Dad reentered the Air Force after it formed post war and served for 22 years).

From my beloved father I learned about a time when most Americans had very little wealth or personal power. When the war ushered millions of men and women from a life of poverty into an incredible surge of economic power and upward mobility for average Americans, the creation of the Middle Class.

I grew up in that era when the “sky’s the limit.” We live now in a new time altogether where even the poorest person has a high standard of living. Dad and his family had no social security, insurance, scholarships, etc. That all came after the war. We sought to do good things for everyone in that era of trust and positivism.

The year my father was born was 1917. That year President Wilson declared war on Germany, ushering in WWI. The suffragettes began a two-year vigil at the gates of the White House, were jailed, beaten and force fed when they went on a hunger strike for the right to vote. The Silent March, led by E.B. DuBois, took place in NYC to make President Wilson live up to his promises to African Americans. The Russians declared a Republic and Leon Trotsky and Stalin battled over the implementation. Seeds of discontent, triumph and defeat were laid down in that year when the first born baby of the Edgar and Hattie Mae Feathers clan saw the day of light.

How will our individual and collective actions lay down the seeds of the reality our next generations will experience? Are we up to the challenge? I like to think we are.

How Can Regenerative Farming Help with Carbon Drawdown