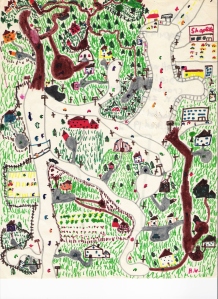 We sat in a booth in the Croton Diner excited to return to the home of my children’s youth. Through the large windows the little pond across the road reminded Tom and Heather of ice skating with friends on icy cold days followed by steaming mugs of chocolate and a greasy burger at the diner. When the waitress told us the pond had not frozen over for at least a decade we were dumbfounded.

My husband and I moved to Croton-on-Hudson, N.Y. in 1972 with a 2 yr-old son and infant daughter. The first winter in the little hamlet of 6,000 residents, snow piled up around our doors and blanketed streets shutting down schools and making the commute to New York a trek with uncertain outcome. More than once my husband slept on the train while it was dug out of drifts.

Living in Croton we played in winter with every pond and nearby stream freezing solid for our skates and sleds. During the cold, snowy months I read books to my children sitting in the cozy dormers of our Cape Cod house with fluffy snowflakes drifting by a frosty window pane.

But the Croton-on-Hudson of our memories, we learned over our two-day visit, was no more. In fact the young families living there looked at us like we were talking about Vermont or Alaska. Other changes were dramatic as well. Our home which once sat adjacent to a large reserve that stretched up the hills for hundreds of acres had been reshaped and developed into a golf course and expensive homes. The woods from where deer crept into our yard and large maples and elms stood over elegant dogwoods all were gone – and with them the little brook that my daughter frequented, sitting on an old stone wall from a century past.

It slowly sank in that here was a dramatic example of climate change. Further, the changes in the landscape from human development reflected the larger forces at work across the planet:
• Loss of forests
• Disruption of watersheds
• Rising temperatures
• Loss of biodiversity.

We were returning to Croton to celebrate the 25th Anniversary of the Harry Chapin Memorial Run against Hunger, an event I helped start with a group of enthusiastic women runners in 1981. We were mothers who met over our tiny tots at school, soccer games and birthday parties, and we all were part of the nascent women’s running movement in New York. While my friends and I worked on the race, I began reading books about the root causes of hunger and poverty. I learned that industrialization of our food system was a part of creating more hunger by out-competing small farmers in America from their farms, and by degrading the soil through overproduction and use of fertilizers and pesticides to produce evermore crop yields through monoculture (growing only one crop on thousands of contiguous acres). Big corporations made huge profits while the quality of food decreased and millions of subsistence farmers went bankrupt.

At age 36, a busy mother, I only vaguely connected the causes of hunger and poverty to degradation of the environment. Worldwide leaders and scientists were meeting to consider global environmental problems. In 1979 for example a Geneva Convention addressed sulfur dioxide emissions and later in 1988 the Montreal Convention addressed ozone depletion. Both were caused by industrial pollution.

Today we face major problems in our food supply. Populations of pollinators—millennia-old handmaidens of reproductive capacity of plants—are crashing around the country from what scientists have discovered is a pesticide-induced disruption in ecosystems allowing pests and fungi to proliferate and kill hives of bees. Honey-bees pollinate over 70% of 100 of humanity’s most important food crops. ReportHoneyBeeHealth.  More frequent extreme weather events and long term drought are affecting the historic agricultural “breadbaskets” of the U.S that have not only fed us all these years but also many countries in the world.

The fifth report of the International Panel on Climate Change (IPCC) was released this month (April 2014). The certainty of their predictions has profound implications for humanity:
• Warming of the climate system is unequivocal…
• Ocean warming dominates the increase in energy stored in the climate system.
• The atmospheric concentrations of carbon dioxide, methane, and nitrous oxide have increased to levels unprecedented in at least the last 800,000 years…causing ocean acidification.
• Human influence has been detected in warming of the atmosphere and the ocean, in changes in the global water cycle, in reductions in snow and ice, in global mean sea level rise, and in changes in some climate extremes.

Our journey home was a sobering experience. An absence of a quarter century allowed us to see the dramatic changes in climate and landscape. It dramatically illustrates how humans can be fooled by living in the present moment, unaware of incremental changes over time. New generations born into a changed environment have no cultural memory of what it was like before. These realities do not bode well for the human community.

The struggles of the poor in the United States are even starker than those of the middle class. A family at the 20th percentile of the income distribution in this country makes significantly less money than a similar family in Canada, Sweden, Norway, Finland or the Netherlands. Thirty-five years ago, the reverse was true.

The rich get richer in America – the poor poorer. Why do we allow it? I believe it is lack of moral fortitude and a set of values that would act as a compass to assure next generations of all that we say we stand for. Those assertions sound more hollow with each passing year and political campaign without actions to back them up.

Still, it was good to journey home, to see old friends and to participate in the Run Against Hunger. It illustrates to me that we can create communities of beauty and safety, or not…there are solutions, happy ones. See here a great way to curb climate changes.

See a photo-journal of my daughter’s experience: Going Home.

One thought on “Journey Home”