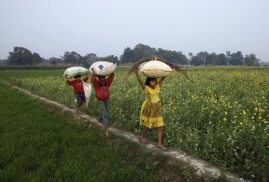 “I can’t tell you how many times I’ve been asked why I’m spending all this time and energy in worrying about street children half way around the world. For those who haven’t known me very long this might help.

This photo is from a newspaper in Hyderabad India, about one hour drive from our new campus.”

Judge John Kuder wrote to his Facebook followers with his illimitable energy and hope for a better future for children and youths in India. His passion stems from two profound events that occurred with a long stretch of living in between.

“Upon completion of law school I began active military service during the height of the Viet Nam war. Although I served my Country well, for which I take great personal pride, I nonetheless became an unwilling observer of the cruelty and human devastation that mercilessly devoured the children of war. Images that I will never forget.”

John returned to Pensacola, his birthplace, to begin a successful law practice. He was elected by his peers to the Circuit Court Bench in 1988, and later elected to Chief Judge of the First Circuit Court of Florida in 1996. While Chief Judge, he was invited in 2000 to participate in an international team of mediators to unravel a political deadlock between the Albanian Supreme Court and that Country’s five political parties.

“While there, however, I was confronted anew with the children of the streets and the unyielding dogs of war that had been quietly stalking my mind over these many years. They were a small society of God’s poorest and least favored, held at bay by the constant interference of forceful but well meaning guards assigned for our personal safety.”

Again, these images percolated in John’s mind and soul, perhaps cultivating the ground in which Judge Kuder and his wife, Susan Bleiler, would begin to dream about making a difference for street children living in poverty, poor health, and abuse. Together they brought The John P. Kuder Children’s Foundation into reality in 2007 – a charity based in Pensacola serving street children in Southeast India.

The National Crime Record Bureau in India reported that 40 million children in India are denied an education and tens of thousands subjected to abuse and sex trafficking.[1]

Looking back on his life thus far, Judge Kuder reflected: “I suppose I have now come full circle from the days of my youth helplessly entangled in the horrors of war to a time when I may yet make an enduring difference in the lives of the least of God’s children. Perhaps this will be my greatest achievement in life.”

To learn more about the work of the Kuder Children’s Foundation go to: http://www.kuderfoundation.org.

[1] The Times of India: “India’s invisible children: Swallowed by the streets.” 10-04-11: http://timesofindia.indiatimes.com/home/sunday-times/Indias-invisible-children-Swallowed-by-the-streets/articleshow/10626388.cms

2 thoughts on “Chasing Down the Dogs of War: www.kuderfoundation.org”