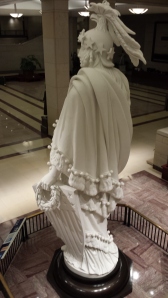 On Voting Day for Congressional seats I am thinking about a famous line from Gandhi speaking to his British oppressors: 10,000 British cannot keep 100 million Indians down.

So, as we expect the $billions of the Koch brothers’ war chest and other Super PAC contributors to influence the makeup of Congress, I say to them: 100 of America’s wealthiest barons and baronettes cannot keep down 350 million American citizens for very long.

And I am speaking to both political parties.

Our nation–this dream of democracy–is less than 300 years old. Most of the governments of the world are thousands of years old. Think of that: we are still newcomers and the dream is still being tested.

The essence of our internal battle is caused by an economic system without democratic guidance within it, to restrain its inherent greed. Capitalism produces poverty and social divide without the good sense and moral restraint on those with the greatest wealth. There is nothing to stop market forces from impoverishing the majority while a minority reaps the harvest of billions.

*The difference now is that among the “people” with the greatest wealth are corporations, considered persons with individual rights per the unfortunate Supreme Court ruling in 2010, Citizen’s United vs. the Federal Campaign Commission. In trying to sort out whether Michael Moore’s film Fahrenheit 911 and Citizen’s United’s Hilary: The Movie were of similar nature, the court ruled that nonprofit organizations can contribute to political campaigns. The way the law came down and is interpreted resulted in nonprofit organizations not required to fully disclose their donors, so that U.S. citizens do not know who is influencing their opinions (through advertisements and videos and news services).

The truly hurtful aspect of the Citizen’s United ruling is a political system now infused with corporate funding that is influencing supposedly free elections. This one ruling wounded the democratic body more than any I can think of in my lifetime as an American. The question is, Is this a mortal wound?

Wealth has degraded our schools and our free press through privatization of public services: the worship of free markets, which as I’ve written above, are without any moral restraints.

So as we watch the voting returns tonight, let us remember that democratic forces are not at work in the results, no matter which side of the Congressional Isle wins. What we will watch is the result of Big Money influencing how citizens cast a ballot.

Without the vigilance of citizens who can think independently, we’ll have a “bought” election every election now. This is now very difficult to achieve without a free press and with every avenue of communication bought and sold by big corporations.

Don’t be naive. Our opinions are being shaped by those forces every day, every hour that we are online, listening to news, or reading newspapers. Until we remove corporate power from our voting and free press and schools, we are an oppressed people under the rule of entities whose names are not even available to us.

Our fledgling democracy is under assault. The first thing we must do is to think and vote independently. The second is to defeat Citizen’s United. Turn off your TV.